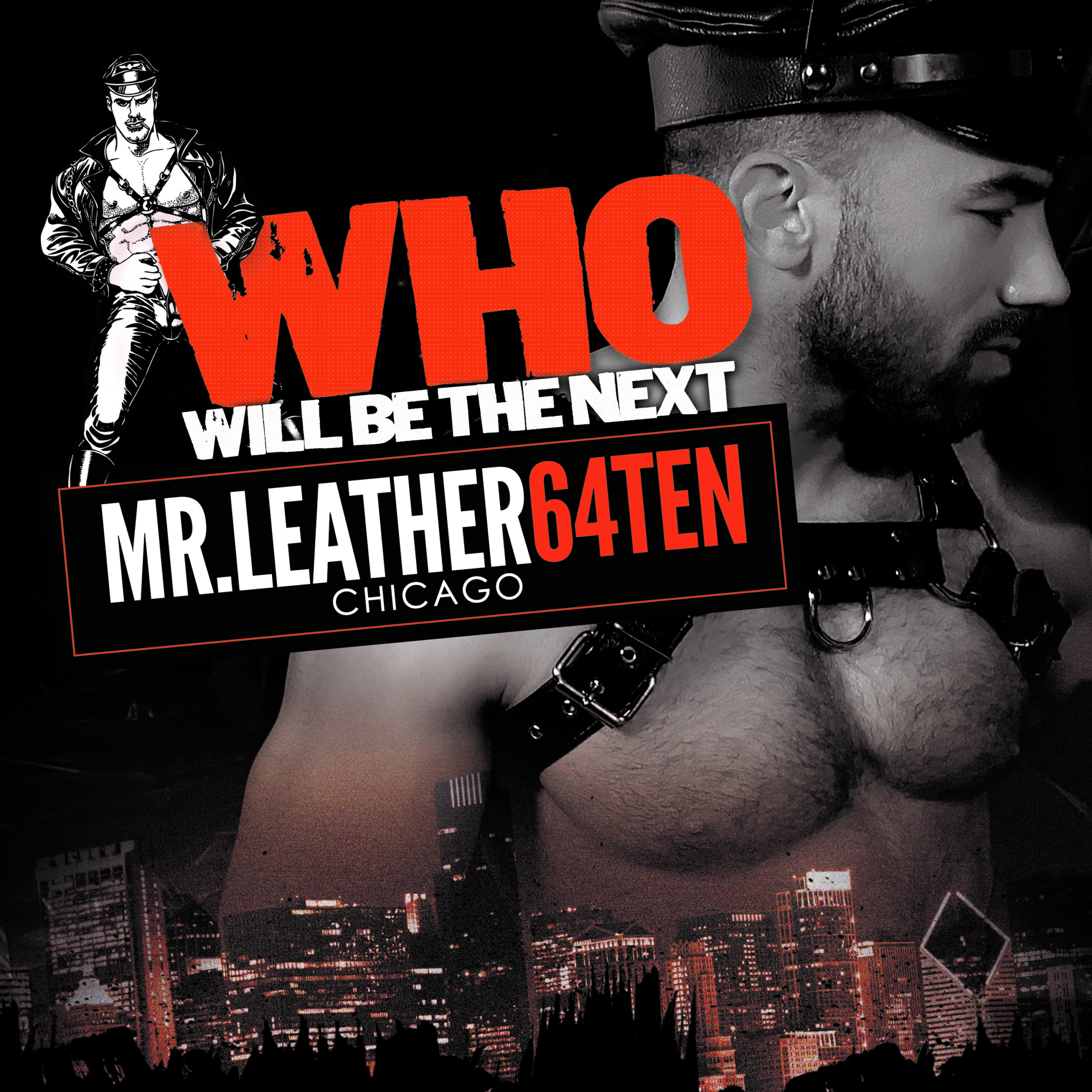 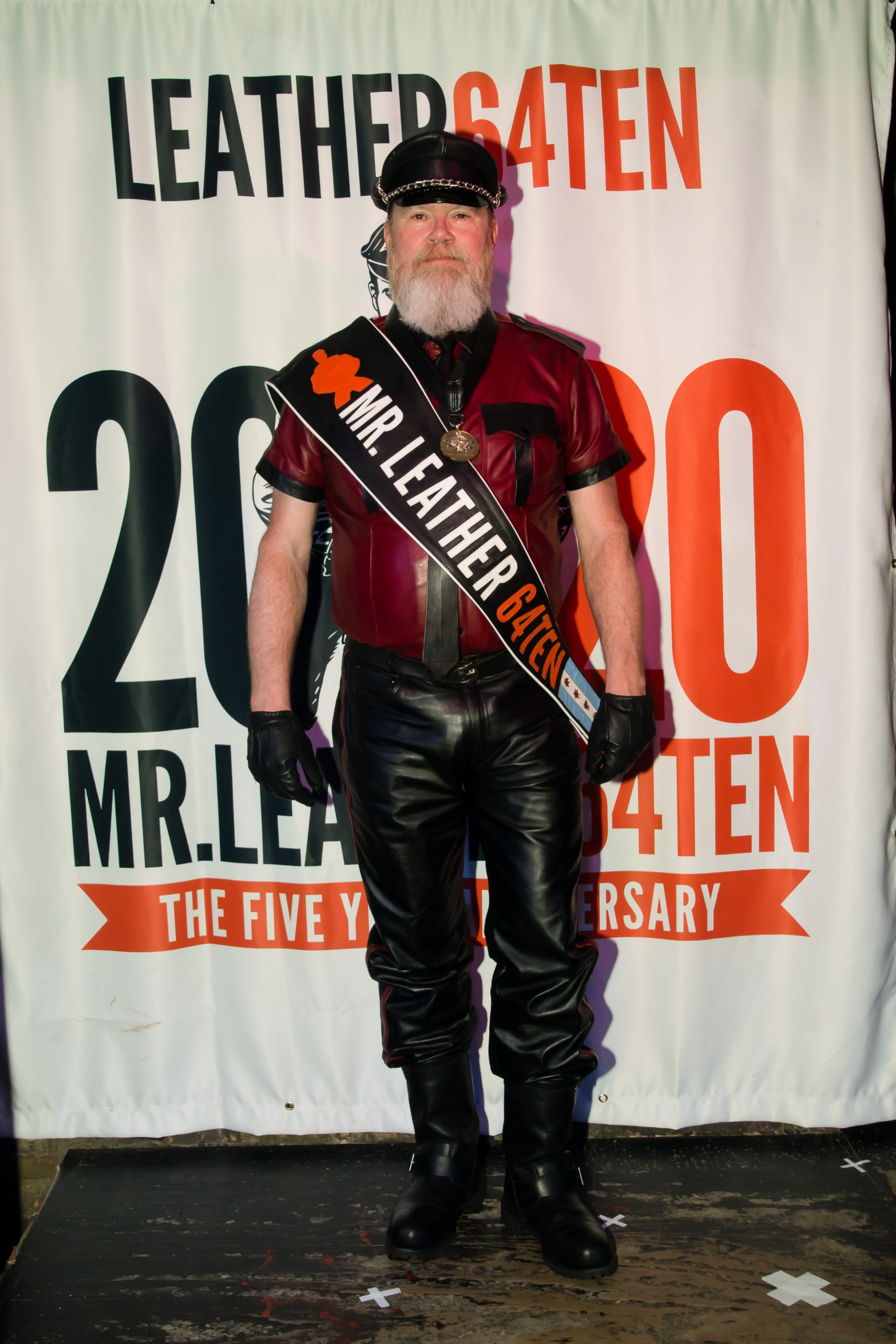 regarding why I wanted the title

in the past there were conversations with friends encouraging me to compete for the Mr Leather64Ten Title but I wasn’t certain it was something for me. This year there were some more of those conversations and I took them to heart. Looking deep within myself among all the reason why I should/should not compete and I came to the conclusion that I would offer up myself to represent the Title not for just myself but because whomever is chosen for any title is representative of the sponsoring organization, business, segment of a community, etc. I’ve lived here in Chicago for almost 5 yrs now and although my personal journey of discovery within the Leather/Kink Community began several years ago, I realized that I had become the mentor, guide, and recognized person that others were coming to for answers, guidance, questions, opinions about Leather. I realized that I wanted to offer myself to represent 64Ten, the Leather/Kink groups/individuals, my Leather family and friend, and Chicago to create awareness that everyone can find their place in society. And that if you’re interested in Leather, the lifestyle, and the social aspect of it, I’ll offer my self to help you find that path and journey.

Re thoughts when won..

Surreal moment. I was very uncertain of who might win. id never done anything like this and it was all a very new experience from the beginning to the end. It was honestly somewhat of an exciting shock. I remember laughing a lot and tons of flashing and a parade of people coming to take photos with me.. honestly one of the most exciting moments…. I still kinda am in disbelief sometimes…. that plain ole average guy me was chosen to represent a Leather Title. It was an AMAZING experience.

re message for the year

Everyone should be who they are both on the inside and the outside. Find your tribe. And as a member of a tribe, look for those that need to be found. One person in a single moment can greatly impact a person’s journey through life in ways you can’t imagine.

Re words of wisdom

Competing in a Title Contest was something I never imagined myself doing. However, it was a life changing event that I have no regrets about doing. If you’ve ever thought about competing, go for it!! It will change you and impact your life for the better. I realized that regardless of being chosen to represent the Title or not, I was part of something large than just myself and several other people up on that stage. Pursue it. You’ll have an experience like no other that you’ll cherish til the end of your days. 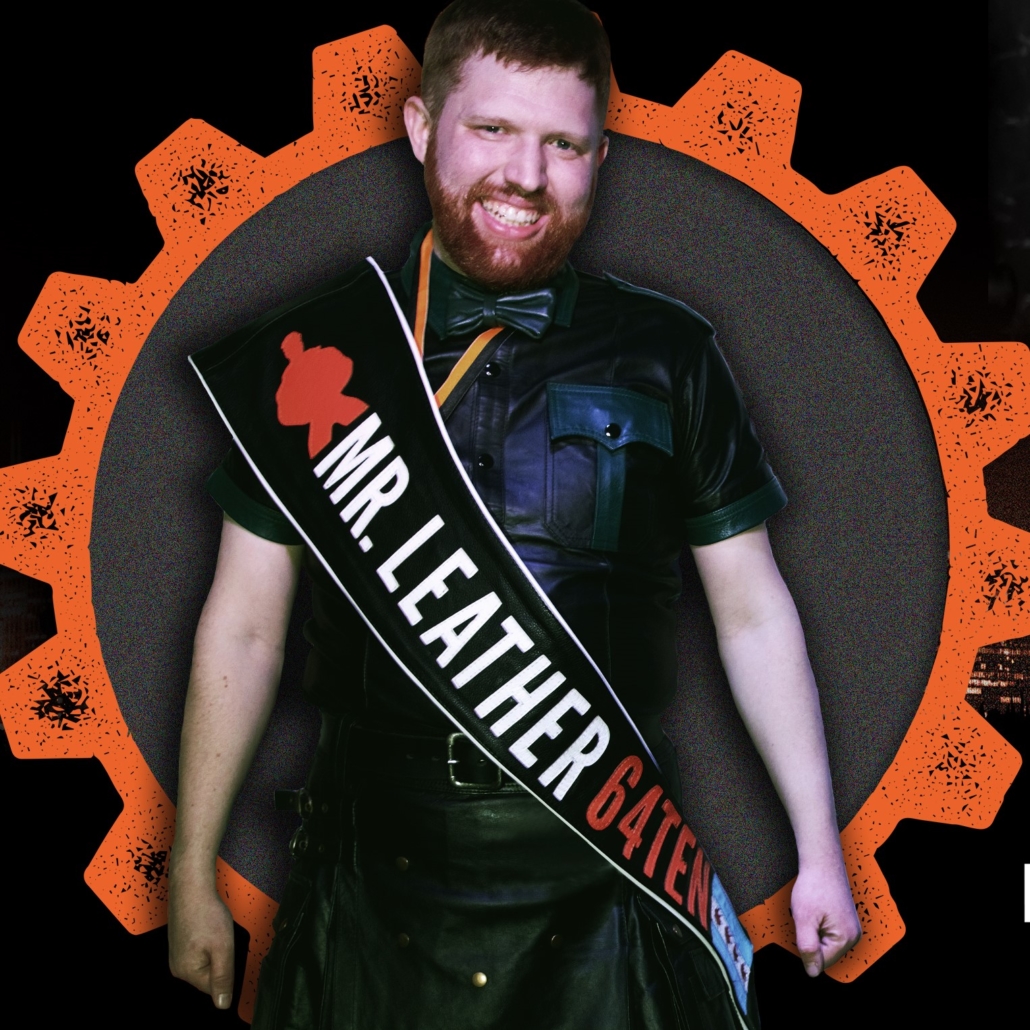 John William is a Nebraska-born leather country boy, currently living in Omaha.  His first experience with leather was a visit to the Omaha Mining Company, after being invited there by a sexy leather daddy on Scruff, and it’s been a ride of curiosity, exploration and growth ever since. John joined the Titans of The Midwest as a full member in February of 2015, and since then has been to several contests/events including: Iowa Leather, Missouri Leather, Twin Cities Leather, IML, CLAW and more. In April of 2016, John took over as Titans of the Midwest at Large South Region, covering the states of Missouri, Kansas, and Oklahoma with KinkU workshops and new memberships. In January 2017 , John became the new At Large West Region Officer, covering the states of Nebraska and Iowa. In May 2017, John took back the South region for Titans. Also a member of Mama’s Family as Mama’s Ginger Leather boy and a part of Nebraska Team Friendly. He volunteers with Titans, Olympic Swim Trials, and CLAW, as well as many other events. He loves super heroes, video games, astronomy, hanging out with friends, art, dancing, singing, Husker sports, biting, nipple play, flogging, bondage, paddling, boot-licking, sounding, electro play, a bit of CBT, rimming, and double penetration (just to name a few).

He is the current Mr. Leather64TEN . He is the fifth one to join the ranks of a fun, great title experience. He was able to raise funds for Nebraska flood victims and North Star Regional Rodeo to name a few. He is the youngest so far to receive the title, and only the second out of state candidate to win it. What an experience and honor to have! John loves visiting different communities throughout the Midwest and enjoys making new friends the most. He is exploring new horizons and hopes to continue helping those in need!

Kurt Allen, currently serving as MR.LEATHER64TEN 2018, has lived in the Indianapolis area for over 25 years. He introduced jock parties to the Indianapolis gay scene as a way to make everyone feel comfortable with their sexuality and embrace their kinky side. He found leather after coming out 10 years ago. Since then, Kurt has worked to bring more people into the leather community through bar events and Kiki’s. His Kinky side came out when his husband threw a surprise bukkake party for him on his birthday during IML several years ago. He’s been open to all types of kink since. If there’s an opportunity for a sex party, Kurt’s all about it. As a part of their vacation travel, he always incorporates several naked and leather events. He’s been a strong supporter for Indiana Youth Group, a local organization that helps the LGBTQ youth in their quest to be comfortable in who they are, and has raised over $5,000 for it’s operation. One of his favorite parts of his title year has been setting up the fetish classes for 64TEN University.

Besides enjoying the leather community, Kurt is a residential real estate agent with eXp Realty in Indianapolis. His passion is serving the Indianapolis urban market and introducing his clients to a great area to live, work, and play. 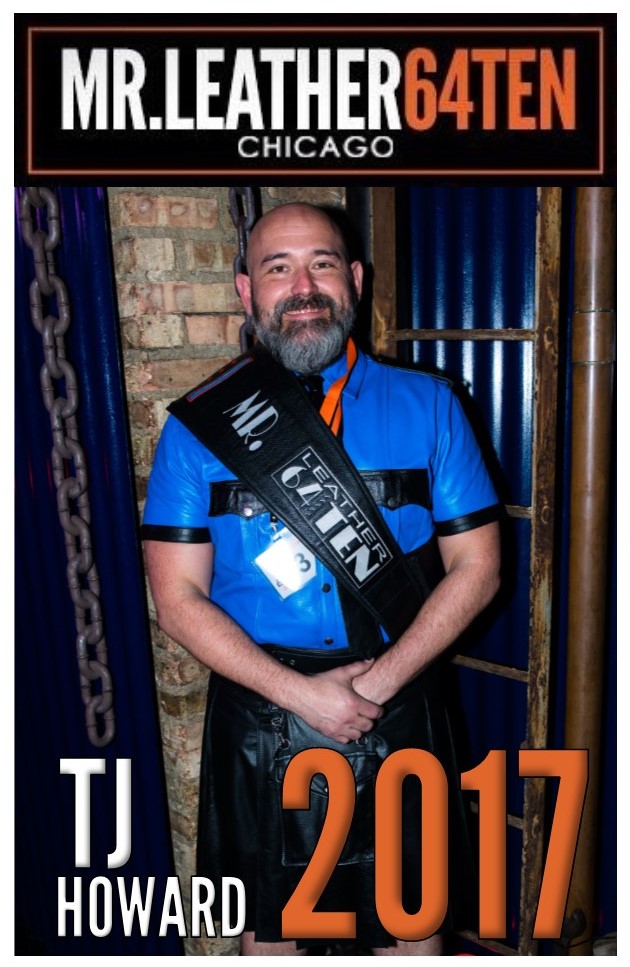 Originally from Jacksonville Fl, TJ moved to Chicago in 2011.  He was peripherally involved with the kink community in Florida but dove into the Chicago community 2 years ago.  A bi-, poly, switch he basically enjoys anything that can be construed as libidinous: leather, gear, impact play, knock out play, sensory deprivation, electro, torture, wax, groups, exhibitionism/public play, and good ole’ fashioned sex.

He’s a coordinator for CLAW, taught multiple seminars, a volunteer for CLCO, works to promote Team Friendly as often as possible, and the current MR.LEATHER64TEN.  He’s a member of Titans of the Midwest and Chicago Band of Brothers. Outside the world of kink he is an avid reader, gamer, music buff, and all around hedonist. 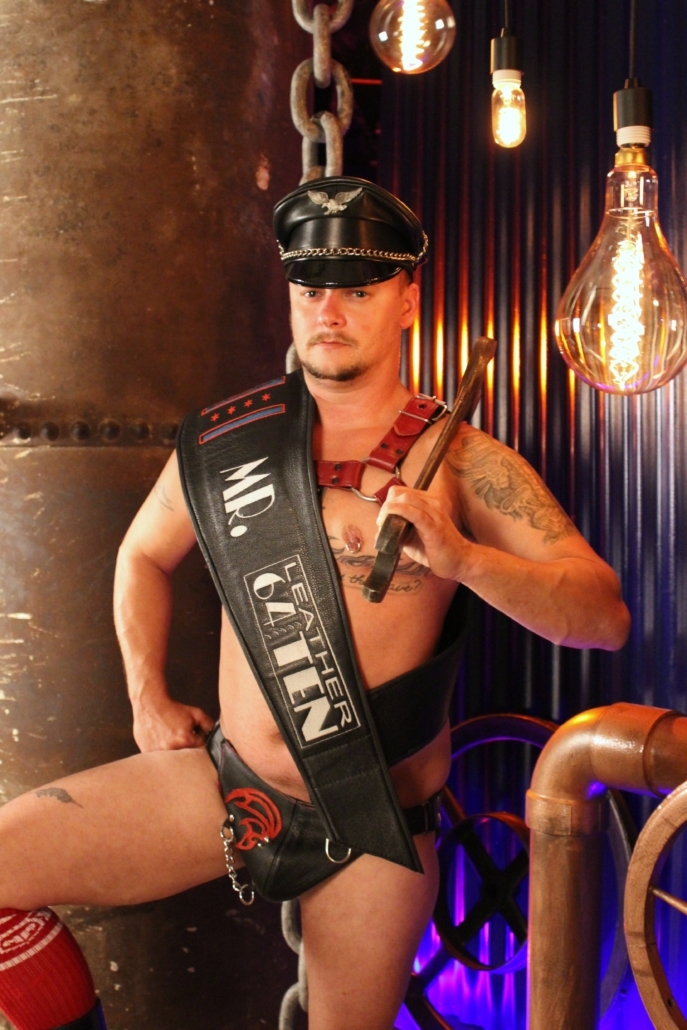 I am James Tyrcha, MR.LEATHER64TEN 2016. I was born and raised in the Chicagoland area.  I am a former Military Police Officer in the US Army Reserve. I am a Transmale. I have been actively involved in the Leather/Kink community for just over 3 years now, but have had a strong interest and love for the community for about 20 years and was involved in some capacity.  I have a strong passion for our community and I have held and participated in many fundraisers to raise money for charity!  One of the most recent, I competed in Barlesque 8 in 2015 raising $2690 for TPAN!

I am a member of The Chicago Band of Brothers, The Leather Archives & Museum,  and The Titans of the Midwest.  I competed in IML 38 (2016), and I am currently employed as a Bartender. 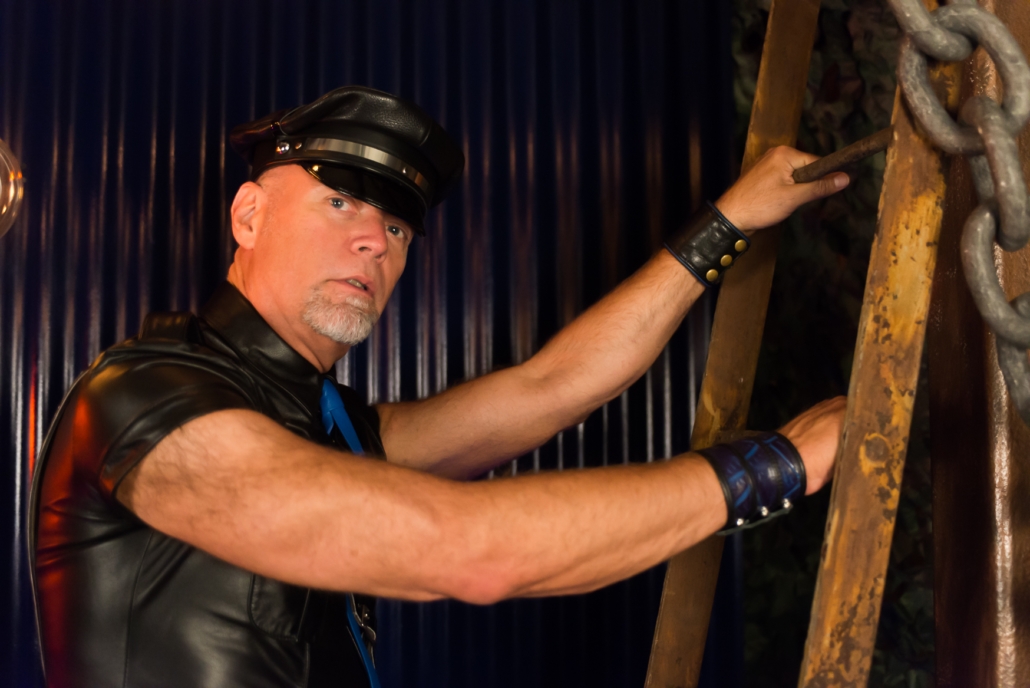 Born and raised Southern Baptist in Baton Rouge, Louisiana. Yeah. I was two tent revivals away from handling snakes. I used to pray to God, “Why did you make me like this?”  And I got my answer in fifth grade when my classmates chased me around the playground – throwing rocks at me – calling me “queer”. I knew God made me an outsider seeking a home.

And I found it right here where you are sitting NOW. One of my first IML’s, there was Guy Baldwin winning and daring me to stay strong. There was Tony DeBlase unfurling the Leather Pride Flag for the first time. I thought the heart was a little precious at the time, but it became my talisman.

And here we are decades later, tens of thousands in Chicago, alone, standing on the shoulders of giants, with a new generation hungry to fight side by side with us to change the world.

And, change is possible.

Because if some frightened little Southern Baptist Sissy can find himself standing in front of you tonight, strong and proud in his leathers, then anything is possible.

The world is out there waiting for us. The world wants us, and, yes, the world needs us.

Let’s join together and save it.